What is high strength gypsum?

High-strength gypsum  differs from the usual in larger crystals of non-fibrous structure and therefore has less water consumption.

A feature of high-strength gypsum is also the monominerality of its structure.

Reduced water demand and the resulting increase in the strength of gypsum is important for cast products. If a hard consistency mass is used, for example, in the manufacture of products by vibration, the amount of water required to obtain the desired consistency from conventional and high-strength gypsum dough is approximately equal and the products obtained have almost the same strength.

The lack of high-strength gypsum - increased creep by it, i.e. the appearance of inelastic deformations during prolonged exposure to stress.

High-strength gypsum is currently used mainly for the manufacture of various forms and some other purposes.

The beginning of setting for both grades of building gypsum should occur no earlier than 4 minutes, and the end of setting not earlier than 6 minutes and no later than 30 minutes after the start of mixing gypsum dough. From the beginning of the mixing of the gypsum dough to the end of the crystallization of gypsum, at least 12 minutes must pass. The end of crystallization is taken to be the moment when the temperature of the hardening gypsum dough, which increased initially, begins to decrease.

The fineness of grinding gypsum is relatively low compared to other binders.

Finer grinding, however, increases the rate of hydration of gypsum, but at the same time increases its water demand. 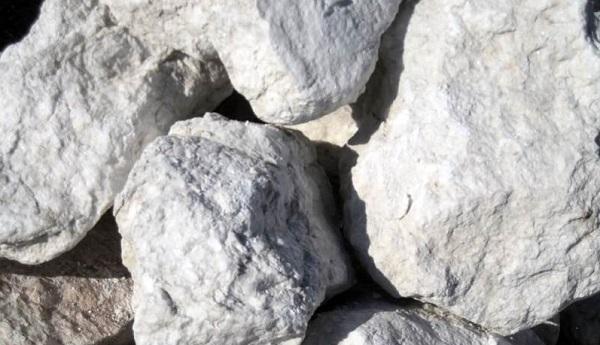 The natural raw material for the production of high-strength gypsum is natural gypsum stone.

This mineral has been mined for a long time. Archaeological studies show that gypsum was used as a building material in Mesopotamia, Babylon, Assyria, Greece (2000 - 1400 BC) for wall and floor cladding. The color of the gypsum stone can vary depending on impurities and can be gray, yellowish, pinkish, brown and others.

Visually, gypsum stone: dense with a fine-grained structure, sugar-like in a fracture or coarse-grained, its crystals are arranged randomly. Natural gypsum (gypsum stone) has a sedimentary origin. The composition of chemically pure two-water gypsum: 32.56% CaO, 46.51% SO3 and 20.93% H2O, usually containing some impurities of clay, silica, limestone, organic matter, etc. Two-water gypsum is a soft mineral - its hardness on a scale Mohs is 2.

The density of two-water gypsum is 2200-2400 kg / m3. One of the pure varieties of gypsum in the form of a fine-grained dense mass of white is called alabaster in mineralogy; this material resembles marble in appearance and is used for sculptural work.

For the production of gypsum binders, the character of crystallization of two-water gypsum is small or large crystalline. Fine gypsum dehydrates faster and at a lower temperature.